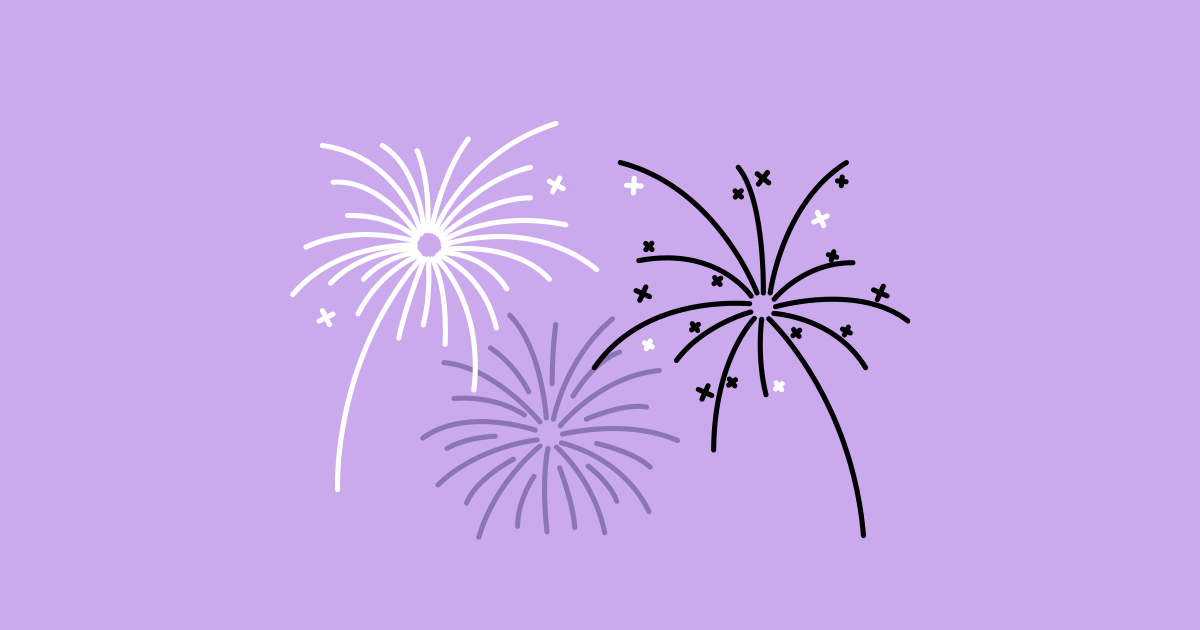 When I was editing Ellii’s New Year’s lesson plans, I started to question the use of New Year’s, New Year, and new year.

When do we use the possessive form of "New Year's"?

Also, there are instances where the words “new” and “year” shouldn’t be capitalized. Confusing, right?

With the holiday around the corner, your students might be asking you about this very soon. I did a bit of research to find out what the style guides and dictionaries suggest, and I thought I’d share the results with you.

Here are some teaching tips for when to write New Year’s, New Year, and new year so you and your students can ring in the new year right! 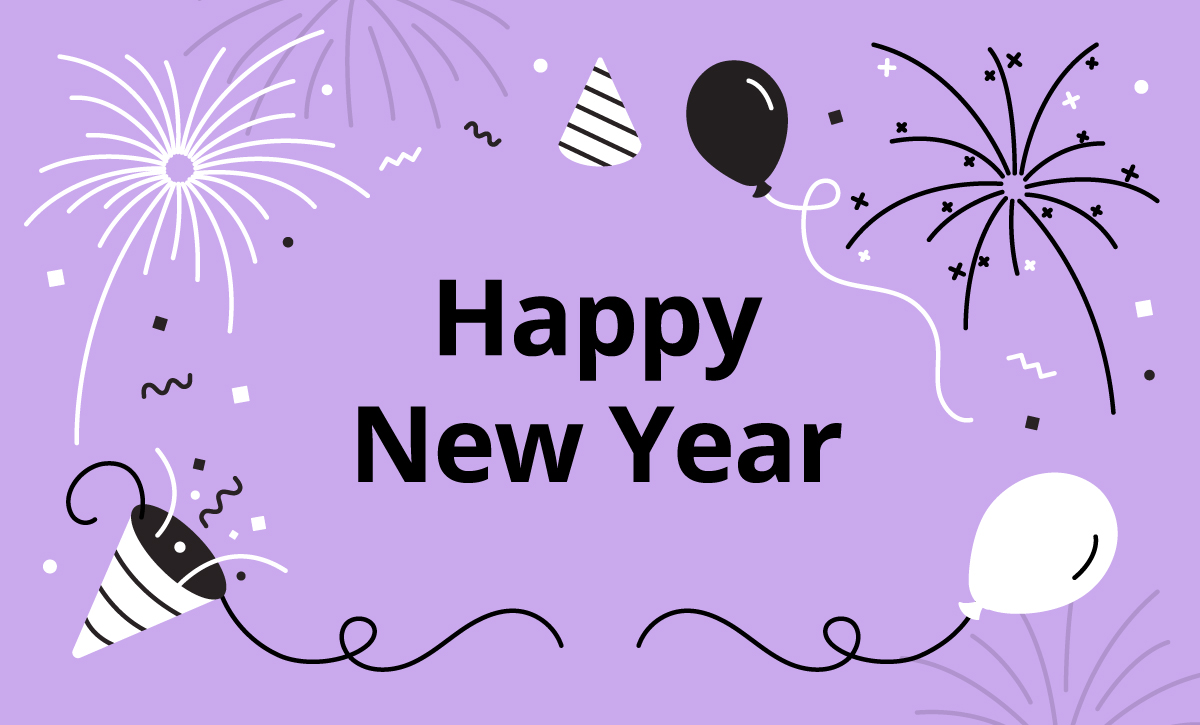 It can be tricky for English learners to understand the difference between “New Year” and “new year.” Why is New Year capitalized in certain instances and not others?

This breakdown should make teaching the difference to your students much easier.

When to capitalize "New Year"

Capitalize New Year when you’re referring to the January 1 holiday.

When to lowercase "new year"

Lowercase new year when you’re referring to the year as a whole. 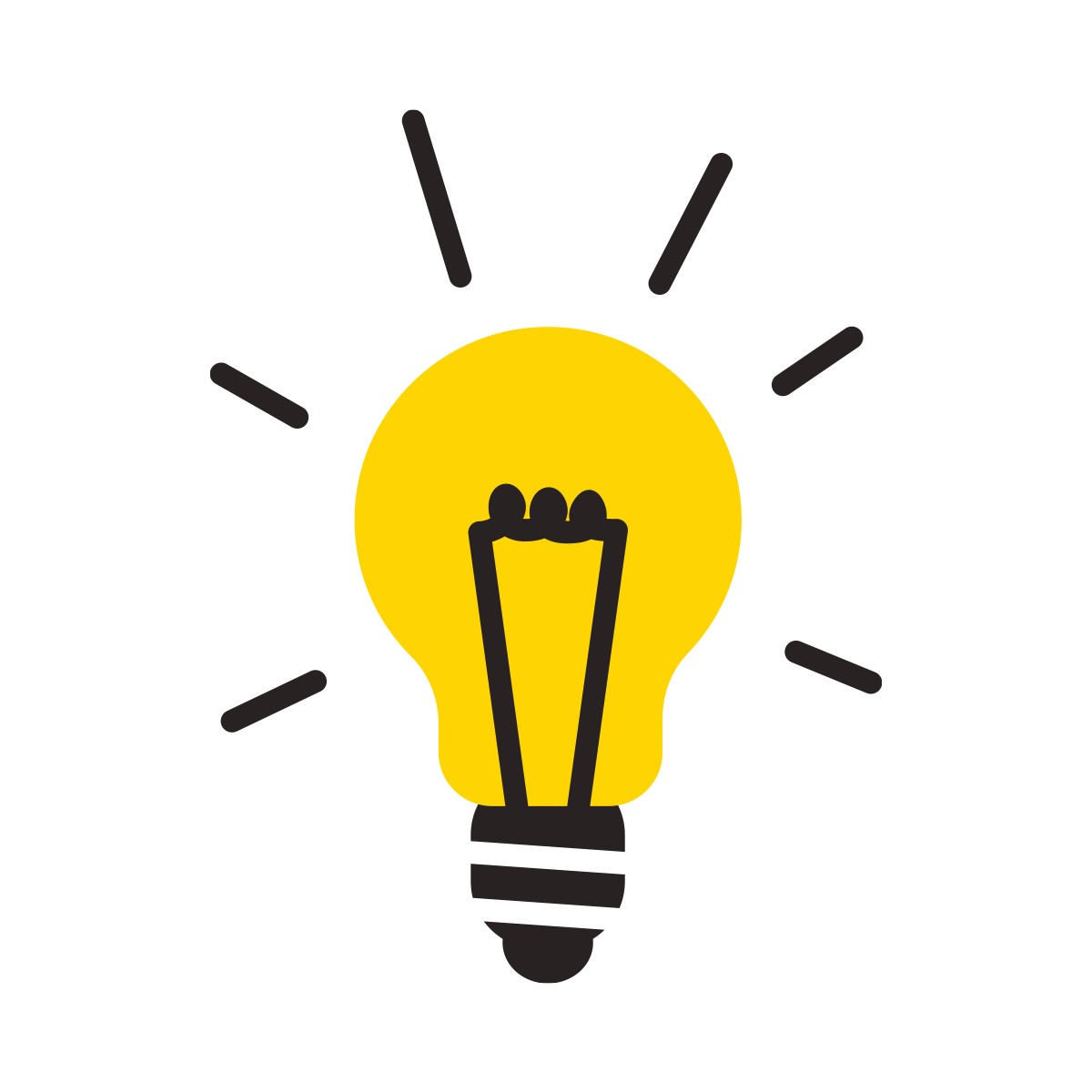 When to use "New Year's"

Use the possessive form New Year’s when you’re referring to December 31 or January 1, or when you’re describing celebrations, resolutions, or activities made on New Year’s Eve or New Year’s Day.

According to The Chicago Manual of Style, when the words “eve” and “day” are present, we clearly need the possessive form “New Year’s.” Think of it like a shortcut—instead of saying “New Year’s Eve,” we can simply say “New Year’s.”

But what about when “eve” and “day” aren’t present? People sometimes forget to include the ’s when it should probably be included.

For example, when I wrote a blog post called "7 Christmas and New Year’s Classroom Activities," I chose to write “New Year’s.” Why? Because I was thinking of the holiday “New Year’s Day,” and I was simply dropping the word “day” like you would when you say “Christmas” (instead of “Christmas Day”). 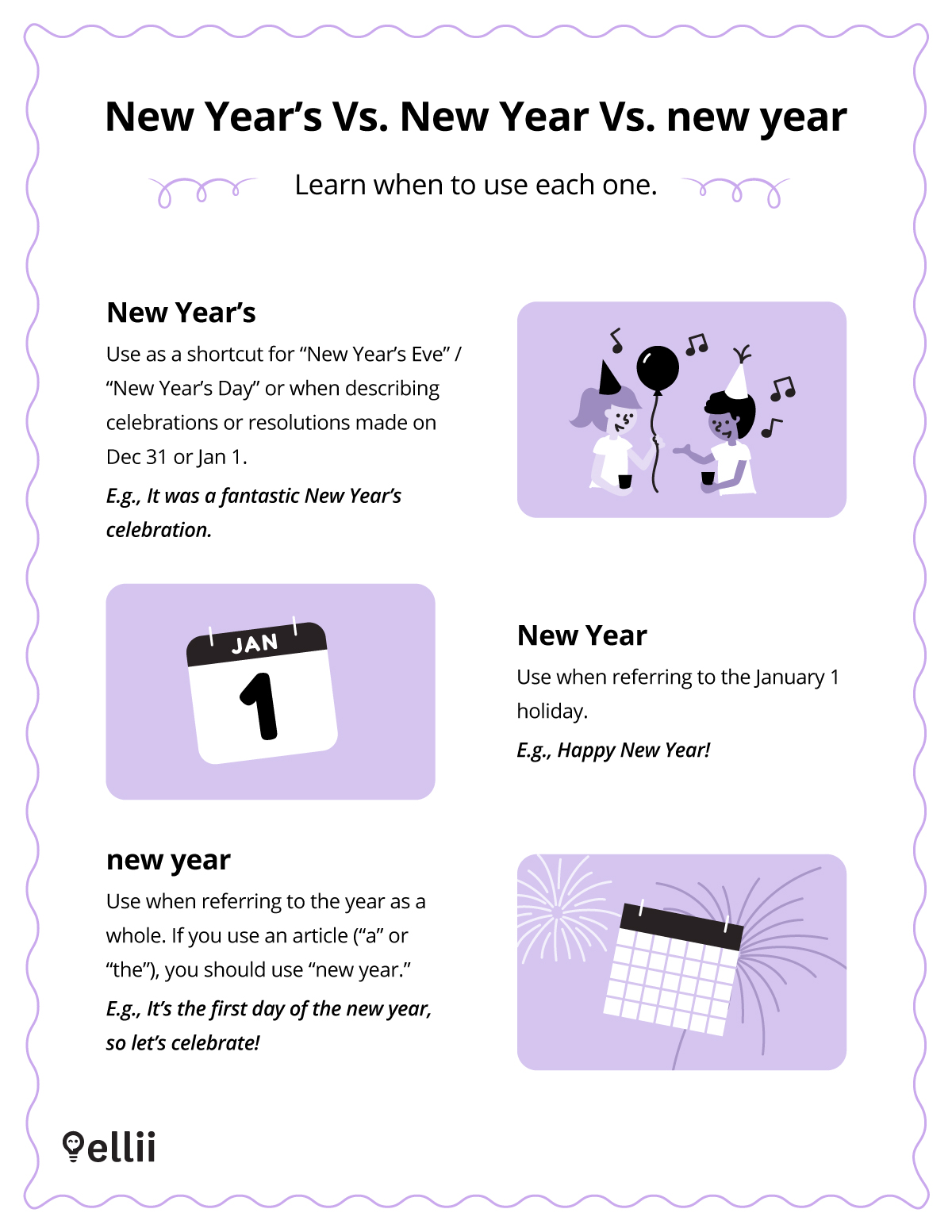 Print this cheat sheet for your English language learners.

What the research says

What do the dictionaries have to say about “New Year’s” vs. “New Year”?

Merriam-Webster’s Collegiate Dictionary has an entry for “New Year,” but states that usually “New Year’s” is used.

I would use “new year” when following an article (“a” or “the”), and I would use “New Year’s” in all other cases, aside from the expression “Happy New Year.”

(Note: “Happy New Year’s” is also possible, but not as common in North America.)

What do you think?

Editor's note: This post was originally published in December 2012 and has been updated for comprehensiveness.

Thanks for sharing your research! This was helpful.

Thanks, Isabelle! I'm glad you found it helpful.

It depends where you come from I suppose, but in the North of England the question is often asked, 'what are you doing for New Year?' - usually meaning 'How will you be spending New Year's Eve?', but equally, could include New Year's Day. In this instance 'New Year' means any part or all of the holiday period.

With regard to 'Christmas and New Year's Classroom Activities', I cannot agree with your choice.

Firstly, there appears to be two rules in play in the same phrase: wouldn't it need to be Christmas' if there is an insistence on New Year's?

I am not a pedant, so each to their own on this one - as I say, maybe it depends on where you're from: but I still prefer my version. Happy New Year.

Thanks for sharing your point of view, Allan. I agree that many language differences are due to different geographical locations.

It's true that 'Christmas and New Year's Activities' does look a bit strange. My reason for the apostrophe is that the holiday names are 'Christmas Day' and 'New Year's Day,' which would then be shortened to 'Christmas' and 'New Year's.' But I agree that the apostrophe 's' could be confused with the possessive sense. I definitely didn't mean 'the activities belonging to New Year,' but rather 'the holiday activities.' Maybe 'Christmas and New Year Activities' would be less confusing.

Anyways, great comments. I've enjoyed discussing this with you! :)

Thank you for this, Tanya. When you are away from the English-speaking world, and you live in a Spanish-speaking environment, one often forgets little things like these... Happy King's Day! Didi

You're most welcome, Didi. I think people forget English's quirky rules when they live in an English-speaking country, too! I need to look up King's Day now, but happy King's Day to you, too! :)

I really appreciate the blog on the difference between 'New Year' and 'new year' which may have caught me off guard to explain to very curious students. However, it is rarely said, 'Happy New Year's Day' and mostly 'Happy New Year', although I also hear 'Happy New Years'.
Question is, are we celebrating the new day or the entire year. Therefore my choice will be 'Happy New Year'. Thanks for the awareness.

Hi, Julie! Great question. It depends if you're referring to the holiday or not. In those cases, I think your students are talking about food they eat on Jan 1 and money they receive as a gift on Jan 1, so I'd recommend using "New Year's food" and "New Year's money."

Thank you for this! It was very helpful!

I LOVE the cheat sheet!

We're happy to hear that, Katlyn! Thanks for commenting.