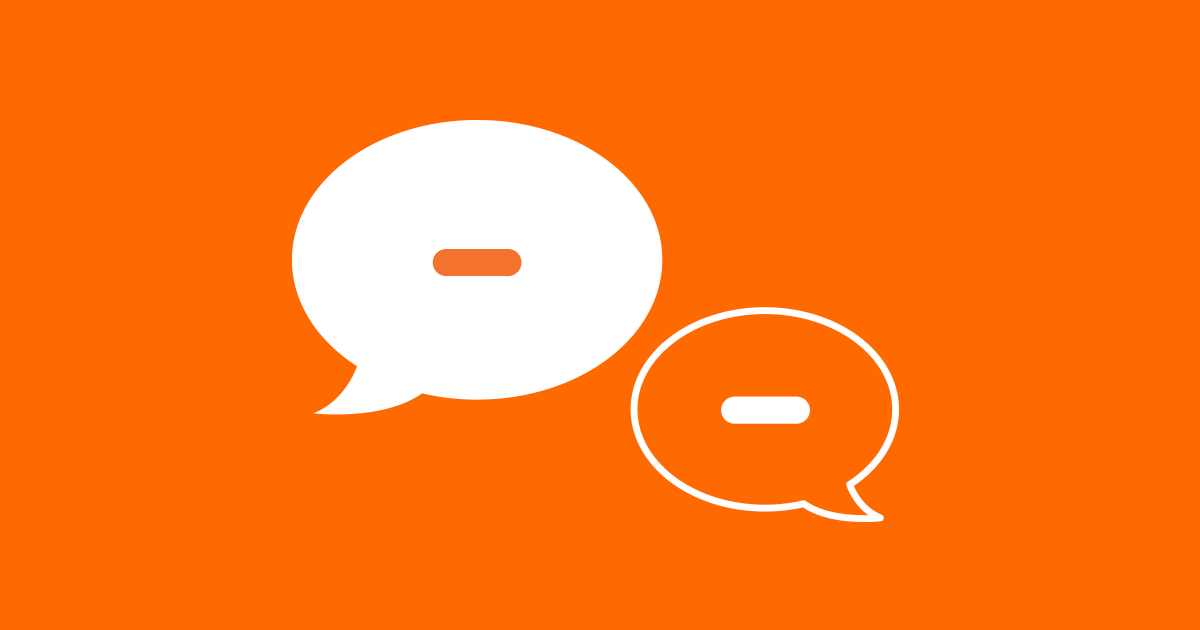 Before you present the three common negative verb patterns in class, try eliciting them from your students by asking the following question:

How would you make these sentences negative?

Go over the negative sentence patterns for the Be verb (pattern A below) and other verbs (pattern B) in the simple present and simple past. If your students are ready for more complex verb tenses (simple future, present perfect, etc.), introduce the pattern for verbs with two or more parts (pattern C).

Can your students think of more examples for each pattern?

Did your students notice the placement of not in each of the patterns above? Ask if anyone can explain the position of the adverb in each case. If no one can explain it easily, or to reiterate, tell them the following:

After teaching the basic patterns and positions for negative sentences in English, go into more detail with the following examples. The examples in the charts below include different subjects (pronouns and nouns) and various tenses and modals.

A. Negatives with Be: Simple Present & Simple Past 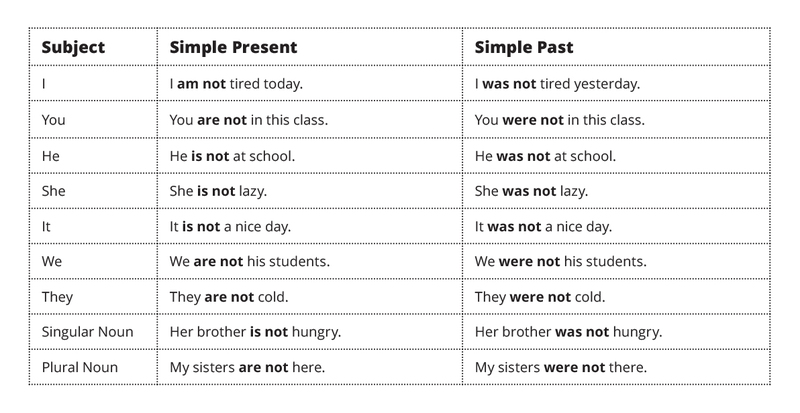 We often contract not in informal spoken and written English, so it’s very important to teach negative verb contractions. Try having your students guess at the contracted forms for each sentence in the chart.

Do your students realize that there are two ways (for most subjects) to form contractions in negative simple present sentences with the Be verb? Both forms are very common and equally acceptable. Negative simple past contractions only have two forms (wasn’t and weren’t), depending on the subject.

Simple Present Contractions with Be

Simple Past Contractions with Be

B. Negatives with Other Verbs: Simple Present & Simple Past 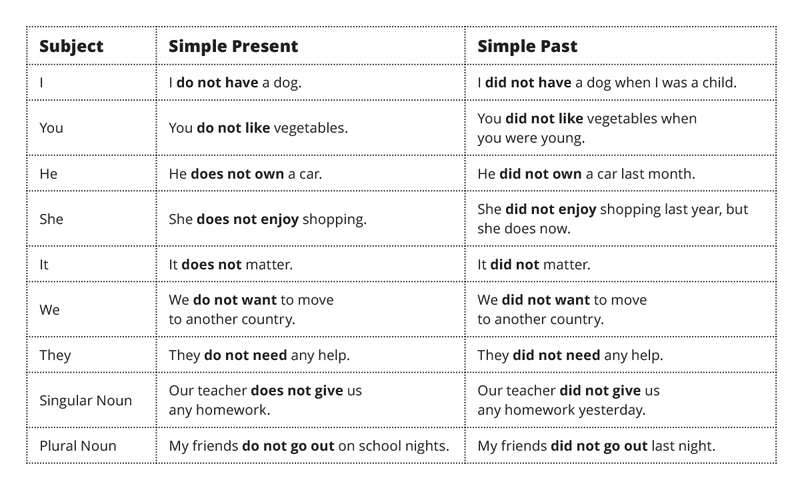 Contractions with verbs other than the Be verb are pretty simple. Tell your students that negative simple present sentences take don’t or doesn’t, depending on the subject. Negative simple past contractions all take didn’t, which makes things easier on our learners!

Can your students tell you the contracted forms for all the sentences in the chart above?

Simple Present Contractions with Do

Simple Past Contractions with Did

C. Negatives with Other Tenses & Modals 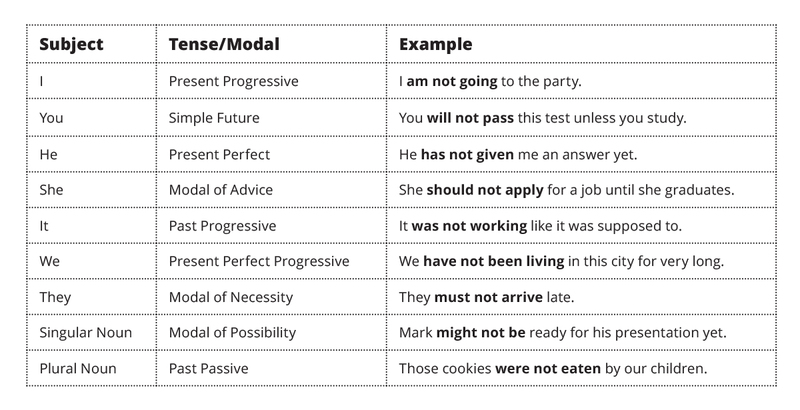 What about contractions for tenses other than the simple present and simple past? The contraction takes place between the auxiliary verb or modal (e.g., be, have, will, should, must, would, can, could) and the adverb not.

Ask your students to tell you the contracted forms of the examples in the previous chart. Examples 7 and 8 provide good teaching points—in North American English, mustn’t is possible but not very common and mightn’t is impossible.

Contractions with Other Tenses & Modals

There are other ways to express negativity in English besides using the adverb not. Never is an adverb of frequency that means “not ever.” The patterns and positions for never are similar to not with one important difference: The auxiliary verb do is not needed with never.

Try to elicit this difference before or after presenting the following examples to your students.

What about using “not” in questions? Negative questions are possible, but they aren’t commonly used. Tell your students that they might hear or use negative questions to show surprise or to get confirmation.

Your students will undoubtedly ask you about the correct way to answer negative questions. This can be a bit tricky! When using “not” in a question, a “no” answer shows agreement with the question and a “yes” answer shows disagreement. Give your students the following examples.

For examples of negative forms in tag questions, see this lesson.

Can you release some sort of explanation on negative inversion? How to use and when we are supposed to use it properly?

e.g.: Not only, have I learned it in school, but also I do have to teach it.

I've written a post on parallel structure and negative inversion that you might find helpful! Find it on our old blog: https://blog.ellii.com/2013/05/16/parallel-structure-and-paired-joining-terms/

Hi, thank you for all the helpful content. I teach advanced Adult ESL and negative form is a big challenge for the students, particularly in terms of the various forms governed by verb tenses, modal verbs and compound verbs. It would be helpful to have some practice worksheets specific to negative forms.

Hi Andrew, thanks for your comment! In this related Grammar & Usage Resource, there are several ideas for practice with negative forms in the Teachers' Notes on page 5: https://ellii.com/resource_categories/103/resources/3043/print

Most of our other practice with negative forms is included in the Grammar Practice Worksheets lesson for the target tense or modal, but I'll let the Publishing team know you're looking for specific negative form practice as well.