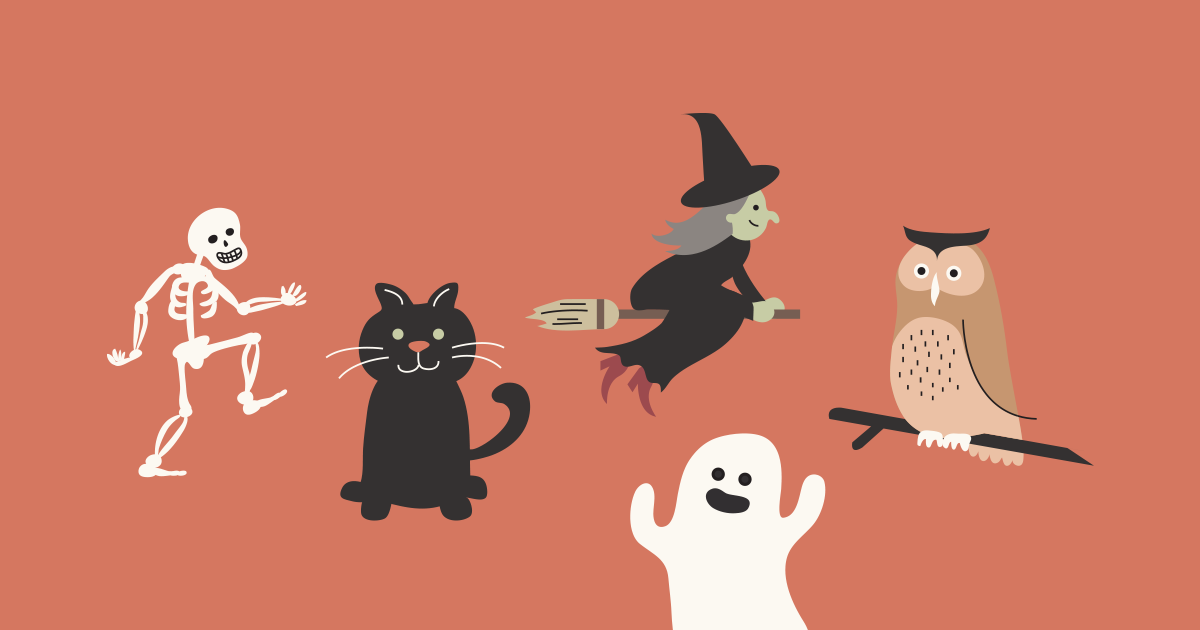 Idioms are everywhere in English, from books and movies to conversations and texts.

They can be tricky to learn because these expressions don’t literally mean what they say, so it’s a good thing that students usually enjoy learning them!

Make it more interesting by teaching idioms related to a certain theme, such as Halloween. 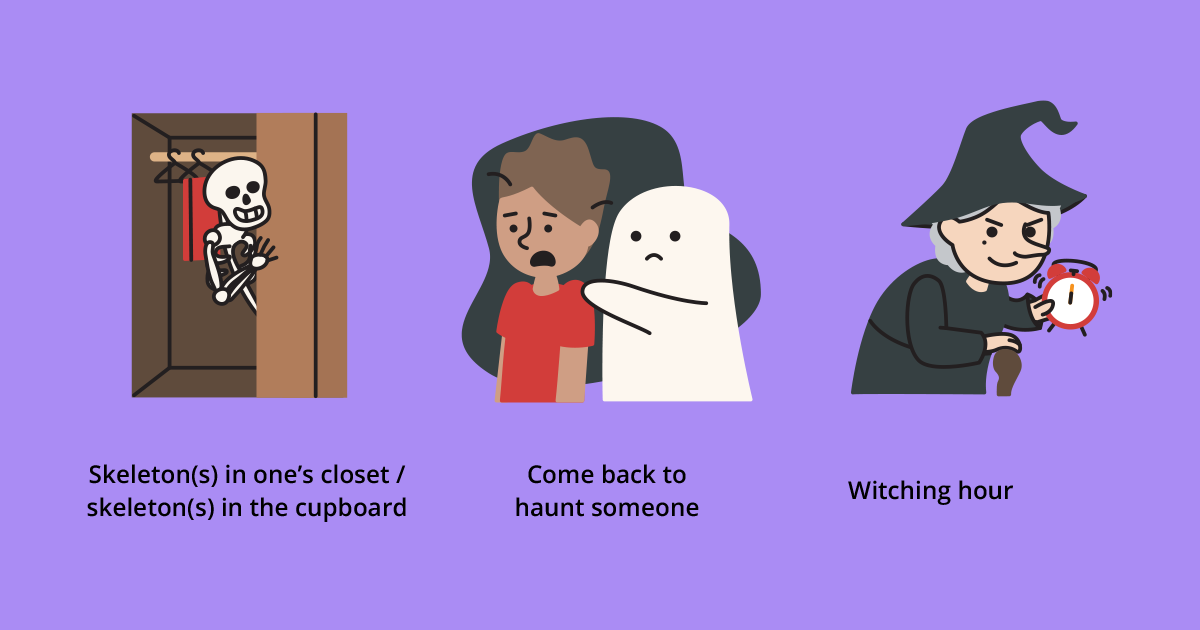 Meaning: to tell all

Example: Okay, spill your guts—I want to hear whatever it is you’ve been hiding from me.

Meaning: very frightened (so scared that a person can't move)

Example: When I saw the giant spider in my shower this morning, I was scared stiff.

Meaning: a building or other structure that is dangerous

Example: That old roller coaster is a death trap. It will collapse one day if they don't fix it.

4. Come back to haunt someone

Meaning: to make a mistake that will affect a person later on

Example: I skipped school a month ago, and now it’s come back to haunt me because my parents just found out.

Meaning: an embarrassing secret (or secrets)

Example: If you decide to become a politician, be aware that reporters will look for skeletons in your closet.

Meaning: to cause a person to be very angry

Example: When my boss ignores me during a meeting, it really makes my blood boil.

Example: Last Halloween, we stayed up till the witching hour listening to “Thriller,” the famous song by Michael Jackson.

Meaning: an area that’s empty and devoid of life or activity

Example: My hometown becomes a ghost town after 9:00 pm every night. There’s nothing to do!

Meaning: a person who loves staying up late

Example: My brother is an early bird who likes to study in the morning, but I’m a night owl so I always study at night.

Meaning: revealing a surprise that was supposed to stay hidden

Example: We weren’t going to tell anyone we were expecting a baby for three months, but my mom posted it on Facebook, so the cat’s out of the bag.

Meaning: doing something foolish that will cause problems in the future

Example: My sister dug her own grave when she decided to cheat on her exams.

Meaning: someone who is easily frightened

Example: My friend is a scaredy-cat when it comes to heights.

Meaning: when someone will do everything they can to prevent something from happening

Example: My husband told me that he wanted us to go cage diving with sharks in Hawaii. I replied, “Over my dead body! I’m way too scared of sharks!”

14. To stab someone in the back

Meaning: to betray someone

Example: I haven’t spoken to him since he stabbed me in the back when he told my secret to the whole class.

Click the image below to print our Halloween idioms and expressions cheat sheet! 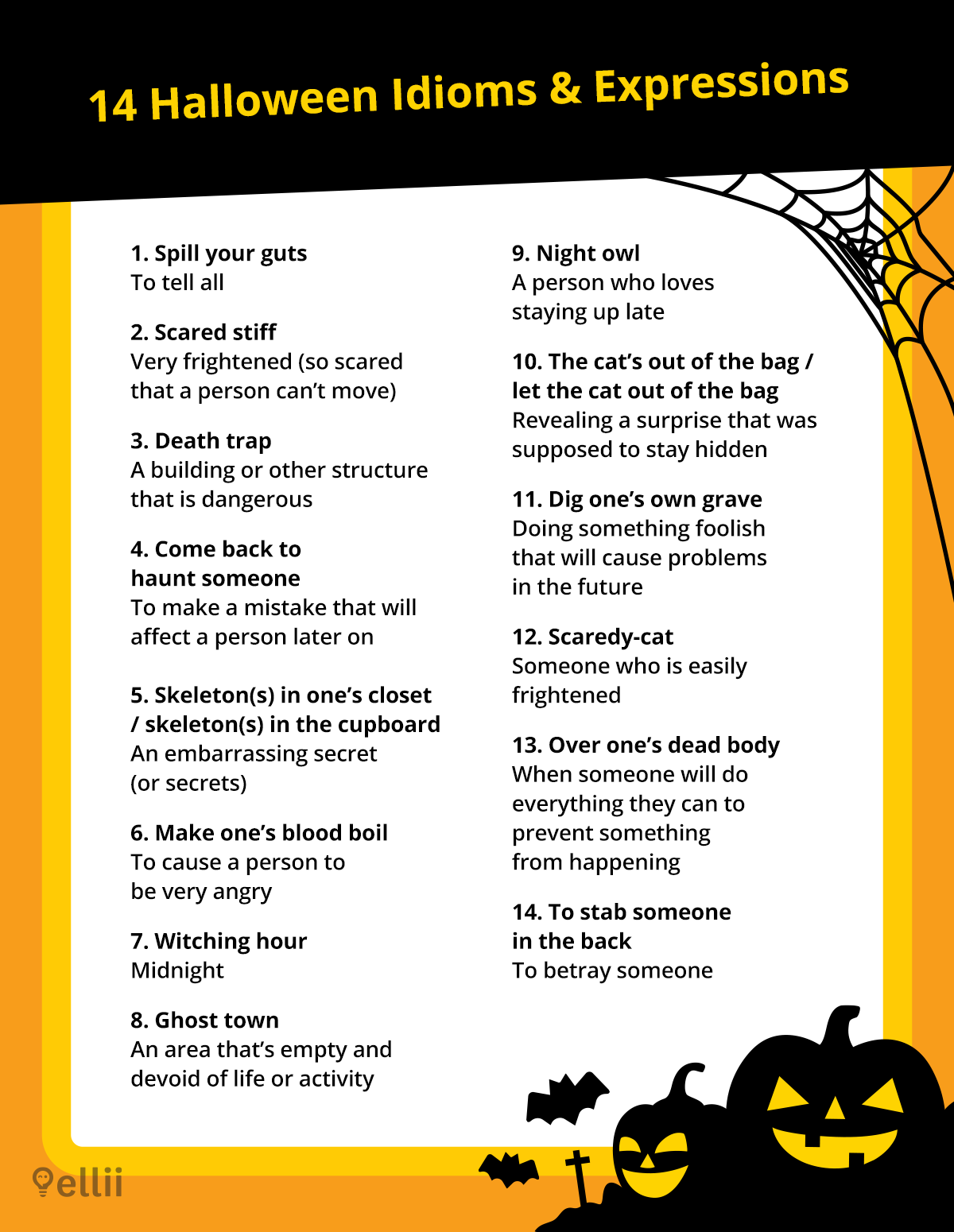 Now it's your turn!

Are there any other fun Halloween idioms or expressions that we missed? Let us know in the comments below. Happy Halloween!

Editor's note: This post was updated on October 19, 2022, to include even more spooky idioms and expressions.

Thanks, Tanya! I didn't realize there was an actual time associated with the witching hour. I thought the witching hour was when kids won't settle down or when a newborn won't go to anyone but mom (around 7 in the evening). I see it is also a stock market term: http://www.cnbc.com/id/45617442
Happy Halloween!
PS. I am a night owl who is scared stiff of mice.

Happy Halloween to you too, Tara! I never knew the witching hour could be related to the stock market. I see it can also be 'a time late at night when the powers of a witch, magician, etc., are believed to be strongest,' which is Merriam-Webster's other entry (besides 'midnight').

PS. I am as blind as a bat when driving during the witching hour. My car is a death trap if I don't have my glasses at night! ;)

Wow its great for learning

Thanks! We hope you have fun with these!

When I put on a facial mask one night, I watched TV and turned off the lights, My husband came back, when he saw my face, he was
scared stiff. 😂😂😂

Great example, Amy! Thanks for sharing it. I can just imagine your husband's reaction!

Thanks for your kind words, Susan!

Tanya, thanks so much for these great idioms. I in Italy where Haloween is quite popular and I´m sure my students (all adults) will love these idioms. WELL DONE!!!

Hi Beata, I hope your students will love them too! Thanks for sharing that Halloween is popular in Italy too!

Yesterday we -Hanan, Asfi and Nafiye- went out for trick and treat on Halloween. We want to spill our guts. We were very scared stiff, because everywhere was like a death trap. A few days ago, we did not do our group work and now it’s come back to haunting us because Veronica greeted us at the door dressed in dark clothes with a knife in her hand. She knew skeletons in our closets. If she told our secret to our family, it would make their blood boil. Besides it was witching hour and she had a knife in her hand. Fortunately, our normally ghost town-like city was very crowded last night. Apparently, Veronika was a night owl too. As we fearfully prepared to dig our own graves, she suddenly let the cat out of the bag. She handed us bright red apples in a basket. We were like scaredy-cats but now we were relieved. Asfi bit her apple happily. Hanan shouted “Over my dead body” and said she could not let her eat that apple. “Are the apples poisonous?” Nafiye cried out in fear. Suddenly Veronika walked over to us with the costume and knife in her hand and said, “Not doing group work is stabbing me in the back, now I will do the same to you”. Saying “Hold on Veronika, don’t do it, here is our group work” we handed her our homework.

Wow, Nafiye! What a great story and an excellent use of the idioms in context! Give yourself a pat on the back. You should be as proud as a peacock!